A stray comment recently reminded me of something in one of my favourite comics, THE QUESTION #21, so I pulled that out and re-read it, and that got me nostalgic for the whole run of the book, so I went back to the beginning and re-read #1 as well. The times I've re-read it before I've always done it in bulk, a dozen or more issues in each sitting, so this time I'll take it more gradually, an issue or two at a time a few times a week. And maybe write about them some on here as I read them and as I finish up. Or maybe not. I still haven't decided yet exactly what I want to do on this weblog (the Kirby weblog is so much more monomaniacally simple. Hundreds of titles to choose from and just try to keep each Kirby era represented on the "last ten posts" list).

For those not familiar, the Question is a character created by Steve Ditko at Charlton Comics back in the late 1960s. He's reporter Vic Sage, who when he needs to do things under the radar wears a featureless mask as the Question. The original stint was brief, only a handflip of back-up stories and one full issue, but memorable, most notable for Ditko injecting some of his philisophical views (objectivism and moral absolutism) which would, in increasing blatant ways, dominate his more personal work to this day.

Eventually DC bought the rights to some of the Charlton characters, and after a few minor appearances they launched the Question in his own book in 1986. The initial creative team was writer Dennis O'Neil, penciller Denys Cowan and inker Rick Magyar, with Bill Sienkiewicz painting the first cover and staying involved as cover inker (over Cowan) for a while after that. The series ran for 36 issues and 2 annuals and was followed by a "quarterly" (in title, not schedule) series that ran several issues. The character has been seen in various other mostly Batman related books since.

I came in the middle of all that, starting around the time that the aforementioned #21 came out and quickly picking up back-issues (including, eventually, the 1960s Ditko stuff) as well as each new one. The book was, in fact, the first on-going book I read when I got back into reading comics in 1988.

With that reading order, it obviously wasn't until I'd read quite a bit that I was familiar with the controversy about the changes made to the character. O'Neil didn't try to duplicate Ditko's philisophical view, one he obviously disagrees with, and instead developed his own, moving the character towards that (not quite using Ditko's version as a starting point). I might have felt differently if I'd read the Ditko stuff first, but I think that was absolutely the right thing to do, and produced what, as I said, was one of my favourite books. It might have been even better if they'd started with a new character from scratch, but the whole "faceless" thing and the "Question" name were so instrumental to a lot of book and are such powerful hooks that it would have been quite a different book. 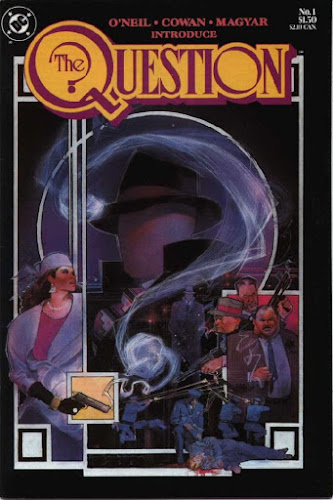 Anyway, this first issue starts Vic Sage on his long transformation. He starts off as Ditko's hero as seen through O'Neil's lens, so he comes across as pretty angry and narcissistic type as he uses his fists to expose political corruption in Hub City.

His reckless style quickly earns the ire of the political establishment, personified by the Reverend Hatch, who has the drunken mayor of the city under his control. This leads to violence, when Sage is ultimately taken down by Lady Shiva (a character ostensibly from O'Neil RICHARD DRAGON series of the 1970s, but actually quite different here). Sage ends up at the bottom of the river, ready for his story to begin.

It's a real corker of a first issue, introducing several of the characters and themes that would carry the book for the next few years. That's always good, and moreso now in an era when a "first issue" often barely gets around to introducing the characters. It revels in the genre trappings of melodramatic crime and heroic fiction and at the same time manages to transcend them.

The Cowan/Magyar art is manages to match the story well. From what I've seen of his earlier work (mostly various fill-ins, and a year of POWER MAN / IRON FIST), this was a big leap up for Cowan, and he'd quickly get even better on this series. It's a book which required quite a bit of martial arts and other acts of violence to be portrayed convincingly, and usually had people in street clothing rather than costumes, and a hero without a face, making body language especially important. This has all that and more.

Anyway, short story long, a great little series, well worth tracking down, and hopefully at some point we'll see a collection of it.