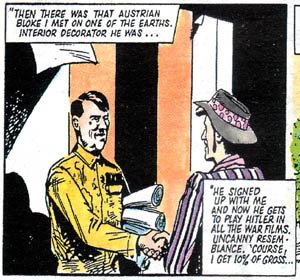 I've got a few dozen of the various colour comics reprinting the Judge Dredd and other stuff from 2000 A.D., almost all of which I paid a quarter each for. Which works out nicely because I usually get at least 36 cents of enjoyment from them. I'm not sure if they ever really got the hang of printing in colour, at least at this late date their colour printing still looked rough, especially on the two-page spreads where you get a huge a seam where they join the pages. At least at this point the lettering was readable.

The lead story in this issue is the four part "The Taxidermist" from 2000 AD #507 - #510, written by John Wagner and Alan Grant, drawn by Cam Kennedy and Mark Farmer. A bit of a GODFATHER riff in this issue, as a mob boss brings his gunshot riddled son and his son's two killers from the Geek mob to a taxidermist to have them illegally stuffed in a pose making his son seem heroic. Y'know, for his mother. Not unlike the Spirit, some of the best Dredd stories are those where he only appears on the edge, and this story is mostly about the taxidermist, being paranoid about the life of crime he's been dragged into.

Backup story in this one is "The Startling Success of Sideways Scuttleton", one of Alan Moore's short stories, drawn by John Higgins from 2000 AD #327, which will presumably show up in the upcoming collection of Moore's non-series shorts. This one's about a con-man and hustler who finds he has the power to move between parallel worlds, using the powers to make money by doing things like taking worthless confederate money to a world where the south won the American Civil War. A decent enough story, but a really nice showcase for Moore's dialogue abilities, as Sideways tells his story. I'm not quite sure I get the punchline of the story. When this was first published in 1983, did the UK just introduce pound coins in place of paper pounds?