Stuff of Interest - June 2006 - The Comics by Robinson 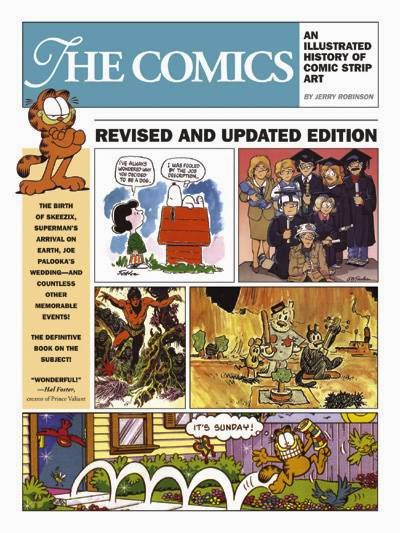 THE COMICS: AN ILLUSTRATED HISTORY OF COMIC STRIP ART
by Jerry Robinson

While there are many debates about when the medium of words married with pictures first evolved into what we know today as comics-be it in nascent prehistoric paintings in the caves of France or the more traditional illustrated adventures of such characters as the Katzenjammer Kids which first appeared at the end of the nineteenth century-virtually everyone born in the last one hundred years has read or seen a comic strip at one time in their lives. In an exhaustive historical overview that captures the magic and innovation of this incredibly vibrant art form Jerry Robinson, comics historian, award-winning comics artist, and co-creator of the popular Batman villain The Joker, takes us on a journey from the beginning of the comic strip industry to the present day in The Comics. Originally published in the early 1970s, this volume has been revised and updated to include commentary on the last thirty years of comics history: from Mutt & Jeff to Calvin & Hobbes, from George Herrimann's Krazy and Ignatz to Patrick McDonnell's Mutts, Jerry Robinson brings the history of this great industry alive for a new generation.

The original edition was one of the first comics history volumes I ever saw, in a library copy over two decades ago. It's great to see that Robinson is still active in comics history writing, and I look forward to seeing the classic stuff again and reading his thoughts on the more modern stuff. Definitely one of the most exciting books in the current set of solicitations.