Typical paranoid twist story from Feldstein in this early "New Trend" issue, as a scientist and his assistant go to check out a mysterious crater, where they find traces of radioactivity and a sample of a strange metal. Going to a local farmhouse, the occupant reveals himself to be part of an alien race that's infiltrating humanity. 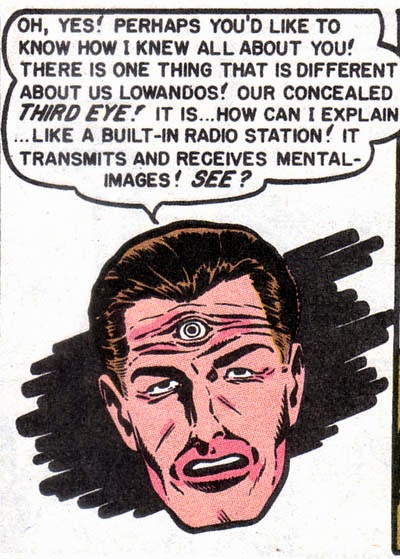 The alien attacks the scientist, but the assistant gets away. Unfortunately no one believes her story, right up to the Secretary of Defense, and she's declared insane. Of course, we see that the Secretary and other men also have third eyes, and are part of the alien infiltration.

Not one of the greats of the EC line, but a good early effort. Biggest problem was the that visuals were just too bland, nothing really exciting about offices and men in suits, even with three eyes.