KAMPUNG BOY by Lat is a 144 page book published last year by First Second, the first English language edition of the work of the artist, who is a popular Malaysian cartoonist. The book was first published in his home country in 1979, and tells of his fictional doppelganger "Mat" growing up in a small village (kampung) in rural Malaysia, up to the time he leaves for a boarding school in the big city at around age ten (which leads to the upcoming TOWN BOY later this year). 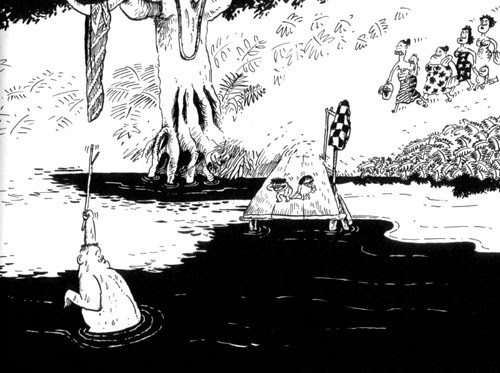 The book garnered a fair bit of praise, and Tom Spurgeon called it his top book of 2006, a year that included some massive best-ever reprints of classic work by E.C. Segar, Charles Schulz, George Herriman and Frank King, major new works by the likes of Alison Bechdel and Eddie Campbell and first English editions of major works by Osamu Tezuka and J.P. Stassen. Not to mention many great books that didn't even make it to his top 50. No accounting for taste, but a list that doesn't include a single one of about 50 Jack Kirby reprints published in the year? Or a major collection of Don Rosa's Uncle Scrooge stories? Or a book with over 500 pages of prime work by Russ Heath and Joe Kubert? Not one Batman story?

Just kidding. I honestly don't see what the fuss is about on this book, though. It's entertaining enough at times, though it's really just a series of short anecdotes about growing up in that region and in that era, always seeming to stop just short of actually having a point, making the transition from anecdote to story, before moving on to the next thing. Every now and then it feels like it's going to be about the inherent conflict behind the change of a region from rural to industrial, the conflict between agriculture and industry, but it stops short every single time, more just noting the situation rather than exploring it. Maybe he does in the follow-up book.

The artwork was pleasant enough, except there I was distracted by the fact that it's a dead-ringer for the style of Sergio Aragones. In particular the Aragones of about 5 to 10 years prior to the original publication of KAMPUNG BOY, with his work in MAD and the spin-off books, as well as DC's PLOP and one-pagers in their war and horror books. Seriously, this image: 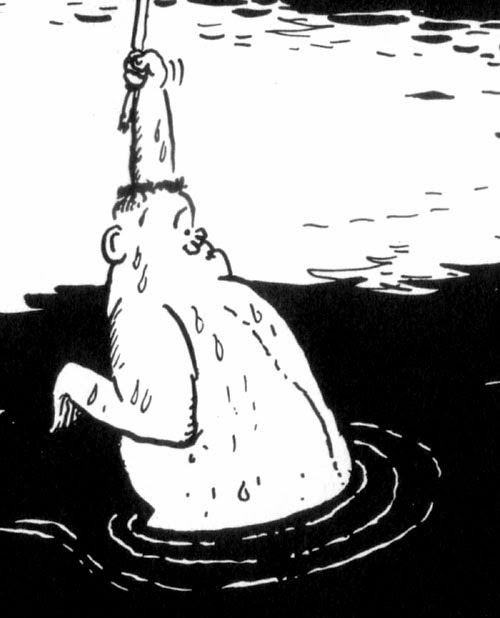 I'm halfway certain that if you showed it to Aragones it would take him a minute to be sure he didn't draw it (except for the noses and sometimes around the mouth). I don't know if Aragones' work was available in Malaysia in that era (certainly the MAD spin-off books, being wordless, would seem to be prime fodder for sale there), but I can't believe this style was arrived at independently. It's not just the way that characters look, it's the way they move, the ink-line, the backgrounds.

Of course, there are worse things you can be than a spot-on duplicate of Sergio Aragones. It's a nice enough book overall if you don't go in with high expectations, with some nice visual humour and a peek into life in an unfamiliar culture in a time of transition. It's a very quick read, less than a half-hour for the 144 page book (the era of Aragones it evokes is his simpler gag work, not the complex GROO era constructions that you can read in seconds and then pore over for minutes), so I'd definitely recommend looking for a library copy before buying it.

[aside to First Second on the flap copy. "Charles Schulz"]