Doctor Who - "The Five Doctors" 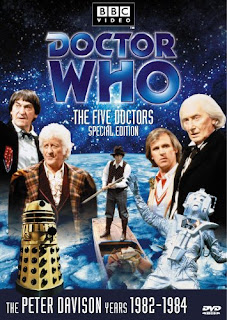 The latest WHO tape I got from the library is "The Five Doctors", a bit of a stunt production from the 20th anniversary of the show, gathering all five actors who played the lead character. Well, all except the first (who was dead and therefore replaced by a passable alternate actor) and the longest-lasting (who apparently just didn't want to participate and was represented by some unused footage and "caught in a temporal hoo-ha" mumbo-jumbo). Also a lot of the supporting characters and villains from through the years.

I have a bit of an odd history with this one as I'd never seen it before, but I did used to own the novelization, the only DW book I've ever owned (I did read a lot of other ones that my library had back then). It's the kind of story concept you really like when you're 13, I guess. I thought it was a pretty good read, although pretty slight, as all the DW books were.

It was interesting to finally see the second Doctor, who I liked quite a bit in here. I'll have to see if I can get a few of his episodes at a reasonable price since he's the one my library is otherwise lacking in.

Fun stuff, though pretty disjointed, as you'd expect given the production requirements of having to bend the story this way and that based on who was available. The overall story was serviceable, it did the job of getting everyone together, and there were a lot of cute character bits throughout. I thought it was a bit of a shame that there were only a few scenes with multiple Doctors on screen together, as their interactions were the most entertaining bits, but too much of that would have been overkill, so they were probably wise to keep it to a minimum. Well worth watching, and certainly more entertaining than anything I've seen from the original series from a few seasons before this up to the end.