Eisner - A Day at the Beach 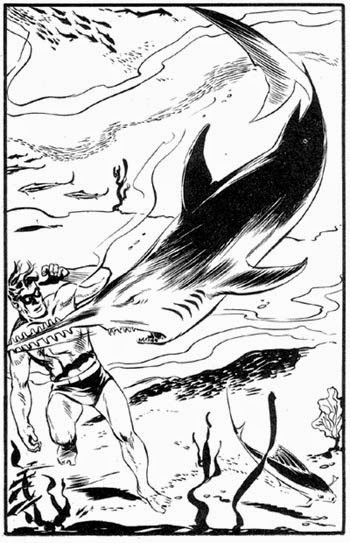 The Spirit in battle with a killer shark. That's a great image (and one Eisner recreated in the 1980s for the reprint of this story). It gets even better later, as the Spirit has an amusing battle with an octopus (not the Octopus, an octopus). Just part of the summertime fun in this light installment of the weekly adventures, where the gang all go to the beach, and PS falls into a hole and is followed by the Spirit into an underwater kingdom ruled by a Dolan like-a-look.

A very odd story in the Spirit run, not one of the great stories but an interesting change of pace, and as pointed out in the reprint a change of Eisner to pay a bit of homage to some of his early illustration influences with the underwater stuff. I also like the little touches like the Spirit wearing sunglasses over his mask and Dolan smoking a pipe underwater.