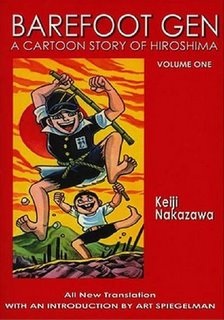 I just finished reading the new editions of Keiji Nakazawa's BAREFOOT GEN (HADASHI NO GEN) published by Last Gasp. That ending still chokes me up every time, and still stands as one of the biggest emotional punches I've ever read in a comic book. The books should be fairly common in libraries right now, so I highly recommend you see if your local system has a set if you've never read the series before.

I'm really looking forward to the future volumes featuring work that hasn't been published in English before. Has there been any word on when those will start coming out?

As I mentioned before, the major change in these editions compared to the previous editions is that these have about 150 pages that were edited out before. Essentially three complete side storylines as Gen deals with other survivors and their stories, as well as a few other short scenes.

The first long part cut was the most important, since the set-up of the storyline was featured in the original books and then just dropped. This time around, we get the rest of the story of Mr. Seiji, the artist who was injured in the A-Bomb attack and was neglected by his family, treated like a pariah, and who Gen was hired to take care of. It's good to get the rest of that story, as depressing as it is, especially since there are a few bits that flesh out Gen's interest in art and using art to tell the story of what happened to Hiroshima so it's not forgotten, echoing Nakazawa's own work.

The next long cut was when Gen and Ryuto go out to the country to bring back Gen's brother Akira. Turns out they had a bit of an adventure on the way, encountering two other children who were begging to get food for their mother. It's an interesting story, the most important aspect of it is that now we have a source and a story behind the wheat that Gen plants in the ruins of his home.

The third "new" storyline deals with the girl at Gen's school who also lost her hair. We now find out a bit more about her, and her older sister, who has to resort to prostituting herself out to American soldiers to get by. The subject matter makes it easy to understand why the editors of the original edition chose to leave that out, but it's an interesting look into other aspects of the aftermath of the bombing.

The books definitely do read better with these missing scenes restored, especially the first one. There are still a few points which seem a bit oddly jumpy which I'd assumed where cut scenes before, but those are the same in both editions, so it might just be Japanese storytelling.

Anyway, a very high recommendation for all four volumes, and keep an eye open for the rest.