Upcoming Stuff of Interest - Facts in the Case... by Zulli/Gaiman 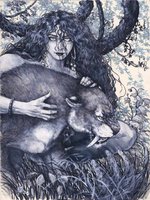 THE FACTS IN THE CASE OF THE DEPARTURE OF MISS FINCH hardcover
Written by Neil Gaiman, art by Michael Zulli.

Come, come and hear of the strange and terrible tale of Miss Finch, an exacting woman befallen by mystery and abduction deep under the streets of London! This is the first comics adaptation of Gaiman's story "The Facts in the Case of the Departure of Miss Finch," which saw print only in the U.K. edition of Gaiman's Smoke and Mirrors: Short Fictions and Illusions and was recently interpreted for his Speaking in Tongues CD. The Facts in the Case of the Departure of Miss Finch is a "mostly true story" that combines the author's trademark magic realism with Zulli's sumptuous paintings, and has been newly rewritten for this hardcover. Join a group of friends, with the stern Miss Finch in tow, as they enter musty caverns for a subterranean circus spectacle called "The Theatre of Night's Dreaming." Come inside, get out of the pounding rain, and witness this strange world of vampires, ringmasters, illusions, and the Cabinet of Wishes Fulfill'd.

Boy, that Zulli cover really makes me miss THE PUMA BLUES. Is 16 years past the statute of limitations for hoping a non-completed comic book series makes a return to reach a proper conclusion?

Anyway, I might take a look at this. I think I read the short story and don't remember it being too noteworthy, and I'm not crazy about that thin hardcover format Dark Horse uses for their books adapting Gaiman prose stories to comics. On the other hand, I do miss Zulli's art. Unfortunately most of his more recent forays into the comic book field haven't been things I was that interested in for anything but his art. Which I guess this falls close to.