EC - Judy, You're Not Yourself Today (Wood) 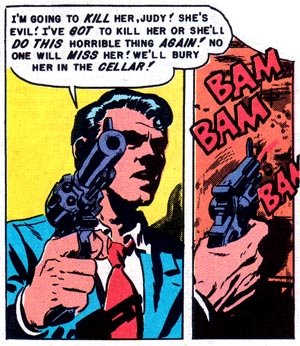 Some nice Wood artwork on this story, about Judy, who finds her body switched with that of an old witch (not THE Old Witch, and this is actually a Vault-Keeper story). Fortunately she's able to convince her husband Donald of the switch, and he cleverly locks up his wife in the witch's body in a closet while convincing the witch in his wife's body that Judy's body had cancer and would be dead in a month. Keep that in mind if this ever happens to you. He shoots and buries the witch, but for whatever reason the body rises again in six months and switches with Judy again. Donald is forced to shoot Judy's body to free her of the curse.

Story seems to have some holes, like the reason for Donald's paranoia about opening the door for strangers at the beginning of the story, even before the witch shows up. Some really nice images though, the scene of the body switch has some nice layouts, looking a little Eisner influenced.