EC - What the Dog Dragged In (Kamen)

Actually this is one of the unofficial and uncredited adaptations of a Bradbury story that pre-dated EC actually making an agreement with Bradbury after he called them on it. Bradbury's original story is titled "The Emissary". 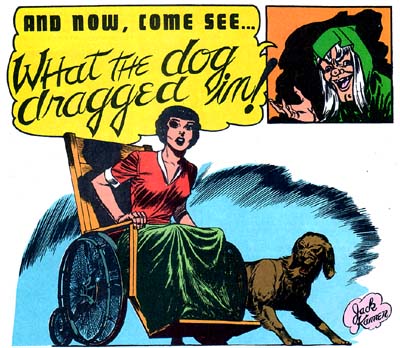 I'm assuming that the Bradbury story made a bit more sense, but in this version we have Betty, a blind wheelchair bound woman who lives alone and sends her dog out to run errands like shopping. Yeah, I'm not quite sure how that works, either. One day the dog runs into the street and gets hit by a car. The driver, a rich man (but lousy driver) named Roger takes the dog to a vet and when he's better the dog leads Roger back to Betty. They continue meeting, with the dog being sent out to fetch Roger every few days, and Roger and Betty fall in love, but just after Roger asks her to marry him his car gets hit by a truck. Told you he was a bad driver. Betty is left wondering what happened to him, until months later the dog vanishes for a few days and returns, apparently having dug up the rotting corpse of Roger, who is now for some reason a zombie. Or something.

Like I said, didn't make a huge amount of sense. Kamen does some good work on it. I'm kind of amused by all that detail in that great drawing of the wheelchair on the title page, given the field his son found fame and fortune in.