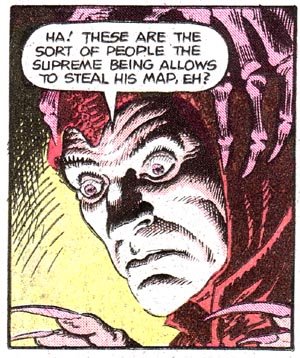 Despite a knowledge of semi-obscure comics that I sometimes scare myself with, and which effectively crowds out many more useful things from my head, there are actually comics I would be interested in that for some reason I know not of. That's where the oft-maddening comics weblogosphere corner of the interweb sometimes comes in handy, like a few months ago when Mike Sterling of Progressive Ruin fame mentioned there was a comic book adaptation of the movie TIME BANDITS done by Steve Parkhouse, David Lloyd and John Stokes. I should add that I did know the adaptation existed, but the cover is by Ed Hannigan and Al Milgrom, so I had no idea who did the interiors.

I'm a big fan of the movie, but not of comic book adaptations of movies in general, so it takes a certain level of interest in the creator to get me to buy one, and Lloyd is in that range. He's of course best known for V FOR VENDETTA, but unfortunately as far as I know he's done under a dozen full comics (half of them HELLBLAZER related) and a few short stories since then. TIME BANDITS actually precedes V (it's dated the month before V debutted in WARRIOR #1. As far as I know Lloyd's work prior to that was on Marvel UK stuff like Doctor Who and Nightraven). 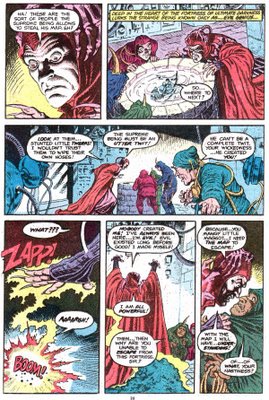 The adaptation is only 48 pages, and a lot of the charm of the movie is in Terry Gilliam's insane visuals and the quirky actors (David Warner as Evil always cracks me up), so the book would probably read a little jumpy to someone unfamiliar with the movie, but for those who have seen the movie it serves as a nice cheap summary of the story, the key scenes, the best bits of dialogue and the visuals, especially from those days when home video wasn't so common. Parkhouse (who I'm mostly familiar with as an artist on such things as the BoJeffries Saga) does a good job of picking out the key bits to include and compressing them, and Lloyd and Stokes do a good job of staying within their styles but still evoking the key visuals. It fails a bit in the more spectacular visual scenes, which I attribute to a lack of space. The giant who carries the boat on his head is relegated to two pages of seven panels each. I'm sure if they had twice as many pages they could have done a splash page of him that would have had the same effect as his scene in the movie. As it is there's only one splash page in the whole book, oddly enough the opening page showing a suburban neighbourhood.

Anyway, I'm not going to call it some sort of forgotten classic, but it is a nice chunk of work from a key but unfortunately non-prolific modern creator, and can often be found for around the original $1 cover price or less, making it a huge bargain these days.