Bits of Toth - The Fox

From Toth's unusually productive period in comics around 1983, he did a bunch of covers/pin-ups for Archie's Red Circle line, mostly featuring the Black Hood, plus two stories featuring The Fox, a character he had kicking around for a while. Lotta' stuff to love on this page, the shadows on the first panel, the guy being pulled right off panel then dragged into the shadows, the very funny last panel. 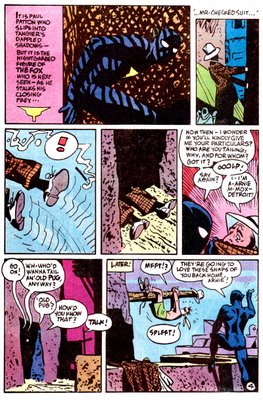 Hey, does it strike anyone else as weird that there's been no mainstream press on Toth's passing, not even a short wire story? If you search Alex Toth on Google News right now you get one short bit from Comic Book Resources (which gets his age wrong), one very brief mention on an Italian site and several reference to a high school baseball player. I would have thought that Toth would have rated something in the mainstream press, for his animation work if nothing else.