Latest series of posts for the weblog, short notes on every Carl Barks story (except the one-pagers). Should take about ten years at one per week. 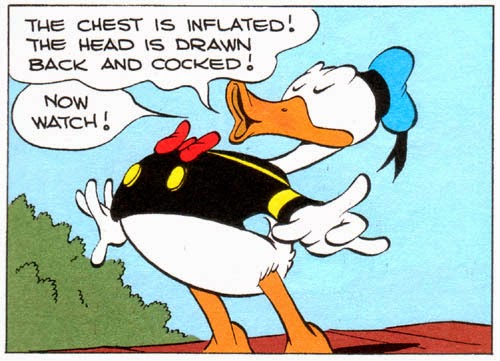 A Donald Duck story in this issue, featuring Huey, Dewey and Louie trying to get sixty cents from Donald, who is out practicing his vaunted echo skills (like all his skills, probably never mentioned before or again) for an upcoming demonstration. HD&L somehow manage to prevent natural echos and make Donald pay a dime for their imitations. The usual escalation, dirty tricks and reversals ensue. I love that aspect of Barks' work, how he'll take something simple and build it up to an absurd level within a few pages. He does that better than anyone.

The highlight of the artwork in this issue is definitely the sequence of Donald demonstrating his echo making technique to the Nature Boys meeting. A really good use of the aspects of the character designed for animation on the page.