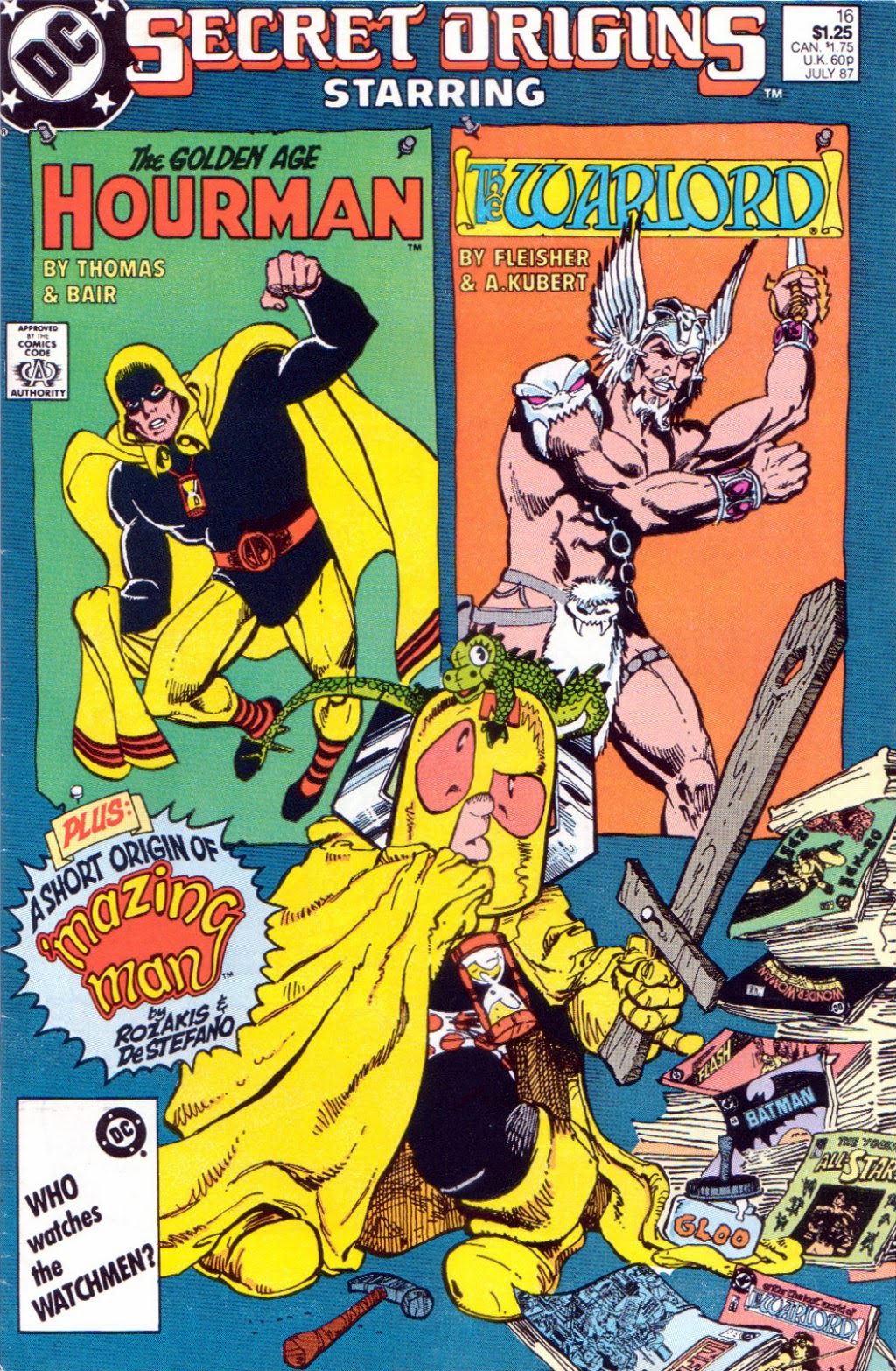 Anyway, this was DC's post-Crisis vehicle for updating or re-inventing or sometimes revealing for the first time the origins of their characters, whether secret or not. Although to show DC muddled editorial mind circa 1986, several of the early issues were explicitly about the Earth-2 versions of the characters. I started buying it on and off around #30, whenever the cover feature seemed interesting, later getting every issue around the time it got itself cancelled. Also started picking up interesting back issues around then, later deciding to get (almost) all of them, helped by finding a few batches of them on sale pretty cheap.

An uneven book by its nature, there are a few gems in the 50 issue run, well worth keeping. Mostly just average stuff, a good sampler of DC books of the late 1980s.

Roy Thomas wrote about a quarter of the stories, mostly updating golden age characters into his grand vision of continuity following Earth-2 being taken away from him (several late issues of ALL-STAR SQUADRON were devoted to the same thing and are essentially spin-offs of this series). Thomas' stories are an interesting demonstration of both the best and worst aspects of his writing, sometimes within the same story. He could come up with a clever connection, a worthwhile update, a good tribute to the original and then get completely bogged down in continuity that less than 2% of his readers will understand or care about and only serves to confuse the issue rather than any storytelling point (the attempt to reconcile every Manhunter makes me want to bang my head against the wall). 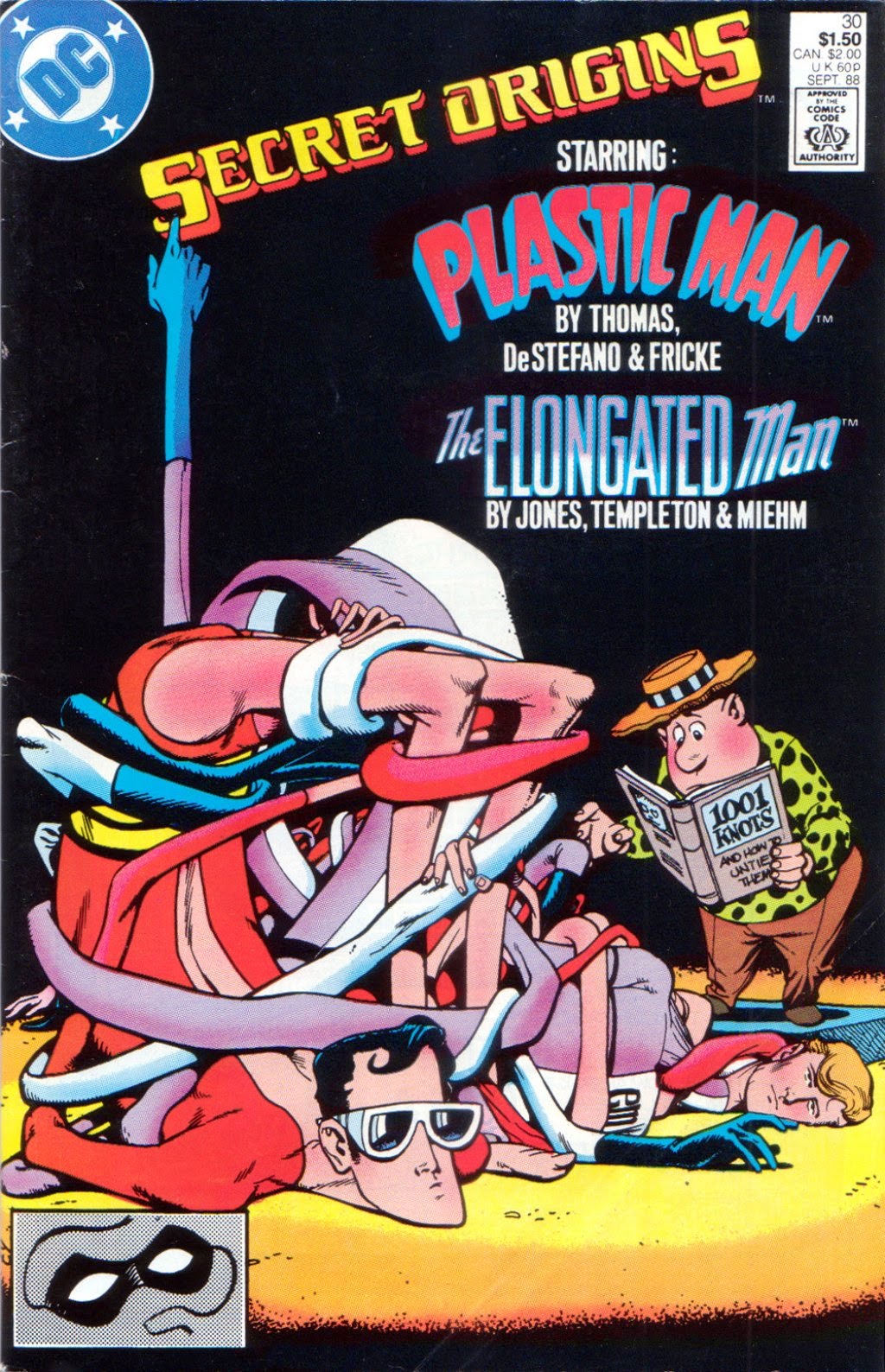 Among the non-Thomas stuff, the book seemed to do better with me when it had a light touch, recognizing the inherent absurdity in a lot of the characters and exploiting that for all it was worth. Ty Templeton wrote and/or drew several that fall in this category which are all good, in particular the Legion of Substitute Heroes origin.

Some very good artwork sprinkled throughout. Murphy Anderson was brought in to do a few of the golden age Quality characters, doing his best Lou Fine. Gil Kane did a new Blue Beetle. Curt Swan did a few nice stories. I can't say I entirely liked the new version of the JLA origin, but man did Eric Shanower do a job on the art.

#10 is kind of famous for the Alan Moore / Joe Orlando origin of the Phantom Stranger, which is some great stuff, but I thought the Levitz / Garcia-Lopez one was pretty strong, too, and the others were okay.

#16 has a single page "origin" of 'Mazing Man which is worth more than most full issues.

#29 has not even close to an origin of the original Red Tornado, but I'm more than willing to forgive it seeing as how it's two page by Sheldon Mayer.

#48 was a pretty good humour issue, with some Ambush Bug by Giffen/Fleming and a Phil Foglio Stanley and His Monster origin.