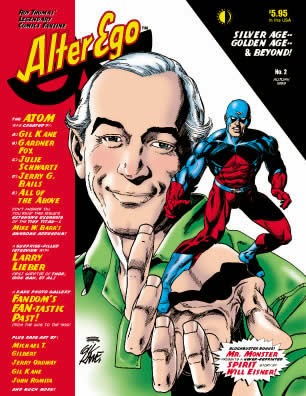 Roy Thomas's currently on-going magazine from TwoMorrows, devoted to mostly pre-1970 mainstream American comics. The original ALTER EGO was a fanzine in the 1960s originally published by Jerry Bails, later others including Thomas. Thomas revived it in 1998 as a flip-book with the more modern themed fanzine COMIC BOOK ARTIST, and went solo after five joint issues with CBA, starting quarterly but gradually building up to monthly as it continues today.

I've been getting it from the start, although I managed to miss a couple of issues in the past year. Didn't notice at the time as I tend to let issues pile up, flipping through and just looking for interesting art when I first get an issue, then reading articles randomly when the mood strike. One of the ones I missed, #40, looks like one I really want, with stuff on Gil Kane, Julius Schwartz and Russ Heath. The other has some stuff I wouldn't mind seeing. 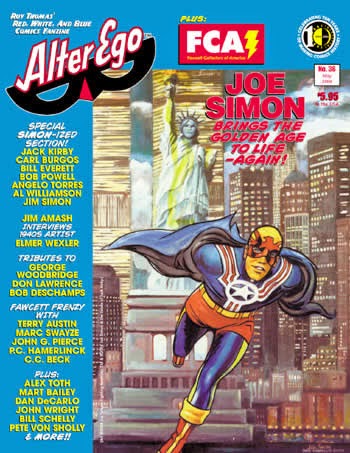 I've been thinking of dropping the book for a while now, at least as a monthly purchase, only picking up those issues with cover features of excessive interest. I enjoy it, but kind of think monthly is too great a frequency for it. There's a lot of stuff I still haven't gotten around to reading in the 47 issues I have, and there's sometimes an excess of mostly pointless articles. Every dozen issues could probably be distilled down to five or six excellent issues.

However, there's a lot of interesting stuff in almost every issue. Even when the focus is on a writer or artist whose work I'm not very familiar with, it's interesting to find out things about how the business worked back then, what life was like, and see samples of some of the work. It can be a bit frustrating sometimes, as the regular feature on Fawcett comics features page after page about books which haven't been reprinted in decades. I wish they'd reprint complete stories of some of the public domain stuff more often, as reading about the comics is no substitute for actually reading them (Michael T. Gilbert's section has some of that, with rare unearthed oddities, and is often my favourite part of any issue). It's been a while since I've even read one of the Fawcett articles as it's at the point where what I know about the company far exceeds what I know about the actual comic stories they published.

The biggest weakness comes when Thomas starts writing about his own comics, which is one of the few times he'll venture into post-1970 material. He has a tendency to go on and on about some of those projects, especially a few that failed to get off the ground and, based on the evidence, deserved that failure, even if Houseroy doesn't see it that way. Seriously, if you thought what he did with Captain Marvel in the published books was bad, you don't want to see what was rejected. He can also sometimes go on about early fandom, which is nice in small doses but a fanzine covering early fanzines... snakes swallowing their tails (weblog posts about fanzines, though, are fine).

And I say this as someone who likes Roy Thomas quite often. Fortunately those articles on his own work aren't as frequent as they seem and are overshadowed by historical stuff.

Keeping all of these for now. I suppose in years to come I might decide to winnow it down, but it'll be hard to pick any issues without something I want to keep. The good stuff is too scattered to single out any particular issues, but leafing through I remember liking the Lou Fine spotlight in #17 a lot, as well as the Infantino and Broome stuff in #10 and both the Gene Colan and Mac Raboy stuff in #6. Plus any issue with one of those weird little essays by Alex Toth is fun, especially when he's talking about other artists he admired.