A random bit of Will Eisner 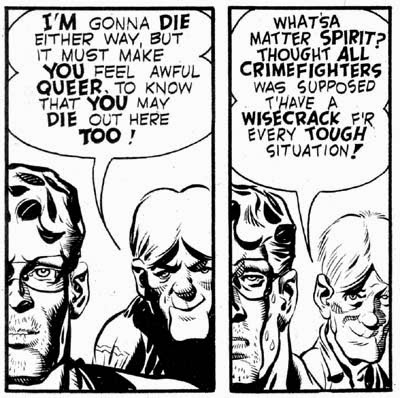 This classic bit of 7-page drama sees the Spirit trapped in the desert after a plane crash while escorting a convict back to Central City. The story picks up as the Spirit wakes up, still cuffed to the prisoner, Tate.

Eisner of course excelled in taking such set pieces and creating minor masterpieces out of them. In this episode I especially liked how he made each page a small scene, skipping a few hours each time, with a clever visual device of growing panels to emulate the effect a fade-in would give in movies, and how the Spirit gets gradually more hot and tired throughout. Tate was also a great foil for him in this situation, constantly talking about all sorts of nonsense while trying to manipulate the situation to his advantage.

While I've enjoyed some of Eisner's later "serious" work, I don't think anything matches what he was able to do with those tight deadlines and strict 7-page format from those first few post-war years.