From the latest solicitations, things I'll probably get, in one form or another, eventually, or otherwise seem interesting. Lots of reprints from DC this month. 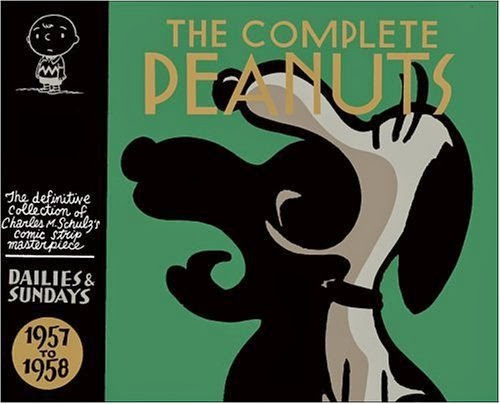 FANTAGRAPHICS
COMPLETE PEANUTS VOLUME 4: 1957-1958 HC
by Charles M. Shultz
As the 1950s close down, Peanuts definitively enters its golden age. Linus, who had just learned to speak in the previous volume, becomes downright eloquent and even begins to fend off Lucy's bullying, while his security neurosis becomes more pronounced. Charlie Brown cascades further down the hill to loserdom, with spectacularly lost kites and humiliating baseball losses. Pig-Pen, Shermy, Violet, and Patty are also around, as is an increasingly Beethoven-fixated Schroeder. But the rising star is undoubtedly Snoopy. No wonder the beagle is the cover star of this volume. Introduction by Jonathan Franzen.
HC, 8.5x7, 344pgs, B&W SRP: $28.95

This is the stuff I most remember from books I got from the library as a kid, just amazing work and definitely the era I've most been looking forward to reading complete. Very good. Also offered in a slipcase with the previous volume if you haven't gotten that yet. 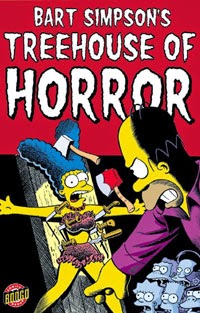 Wow, that's quite a selection of talent. Shouldn't be too hard to guess that I'm an EC fan, and Williamson and Severin especially, so it'll be interesting to see what they do, as well as the rest. 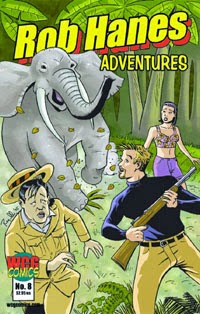 WCG COMICS
ROB HANES ADVENTURES #8
by Randy Reynaldo
In this self-contained story, adventurer Rob Hanes follows the footsteps of an explorer who disappeared decades ago in Africa while searching for an infamous diamond from the continent’s colonial past. High adventure is alive and well in the modern day in Rob Hanes Adventures!
7x10, 24pgs, B&W SRP: $2.95 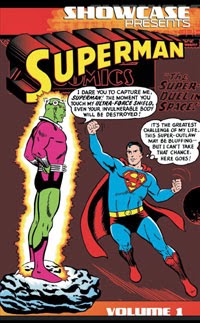 DC COMICS
SHOWCASE PRESENTS SUPERMAN VOL. 1 TP
Written by Jerry Siegel, Bill Finger and others
Art by Curt Swan, Dick Sprang and others
Cover by Swan & George Klein
Kicking off an exciting line of black-and-white reading library titles! This volume collects SUPERMAN #122-133 and ACTION COMICS #241-257, featuring the birth of the Silver Age Superman mythos, including the first appearances of Supergirl, Brainiac, the Fortess of Solitude and more!
On sale Sept 14 • 560 pg, B&W, $16.99 US

Good to see DC finally adopting such a format, and this is some good stuff to start with. I alway enjoy these stories in previous reprints I've seen, and this 560 page chuck of them will be sure to have a lot of stuff new and delightful to me, and the old Swan stuff looks especially good in black and white. 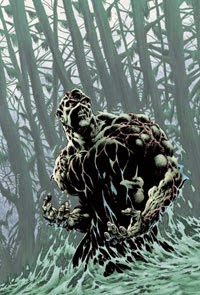 DC COMICS
THE SECRET OF THE SWAMP THING
Written by Len Wein
Art and cover by Berni Wrightson
A manga-sized collection featuring the classic origin and first adventures of the Swamp Thing (also collected in the full-size tpb SWAMP THING: DARK GENESIS), including the first 10 issues of the original SWAMP THING title, all by the legendary team of writer Len Wein and artist Berni Wrightson.
On sale Sept 8 • 5" x 7.375" • 232 pg, FC, $9.99 US

I'm a big fan of the Wein/Wrightson SWAMP THING. Haven't decided yet if I'll get this or try to get the full-size DARK GENESIS (until now I've been happy with the ROOTS OF THE SWAMP THING reprints), but I'm sure one day I'll have one of these versions. I'm kind of sorry this isn't black and white, as it would be great to see Wrightson art like that, and would be a good excuse to get both versions. 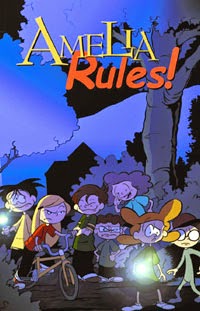 RENAISSANCE PRESS
AMELIA RULES! #15
by Jimmy Gownley
The most intense game of "Truth or Dare" ever, and a cliff hanger that has to be seen to be believed, as the superheroes storyline reaches its penultimate issue. Amelia Rules! has been nominated for both the 2005 Eisner and Harvey awards and is the perfect comic to introduce new readers to comics.
7x10, 24pgs, FC (5 of 6) SRP: $2.95

I've enjoyed what I've read of AMELIA RULES. Been waiting for the collections of this stuff, hopefully a new book won't be too long in coming. 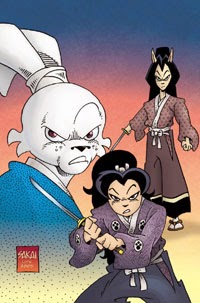 DARK HORSE
USAGI YOJIMBO #87
STAN SAKAI (W/A)
On sale September 28, FC, 32pg, $2.99
GOLD! The slaves laboring in Lord Sanada’s illegal mine—including rabbit ronin Usagi Yojimbo and Geishu bodyguard Tomoe Ame—finally hit pay dirt. But they are at the mercy of the vicious “blood princess” Noriko, who has something horrible in store for them, and all of the other slaves …Meanwhile, the young page Motokazu arrives at the “plague-quarantined” village. Even if he discovers Sanada’s illicit operation, what can one child do against an army of deadly samurai? Will Geishu Lord Noriyuki act on his misgivings before it is too late?! Find out in part five of “The Treasure of the Mother of Mountains,” the latest adventure from world-renowned creator Stan Sakai!

Always look forward to more Sakai, an easy book to take for granted. The latest storyline looks to be exciting, with lots of intricate set-ups in the issues so far. 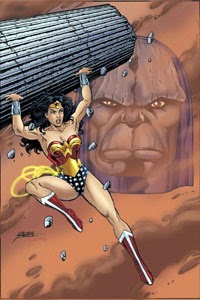 I've got all the Pérez WW issues, and enjoy them. These collections go on the list of books to pick up someday, when there's less stuff coming out, in order to have in a more convienient form. 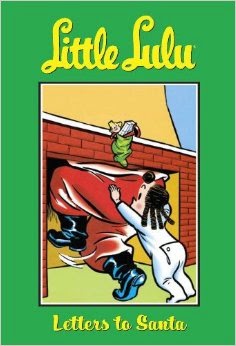 DARK HORSE
LITTLE LULU: LETTERS TO SANTA TPB
JOHN STANLEY (W) and IRVING TRIPP (A)
For eight-year-old Lulu Moppet, nothing is impossible—even if the results of her efforts are impossibly imperfect. Need to quell the fury of a rambunctious two-year-old? Lulu’s got a hilarious fairy tale brewing in her brain that'll do just the trick. Father needs his best suit taken to the tailor? Lulu can handle it—so long as Pop doesn't mind if she makes a few unplanned—and wholly unpredictable!—stops along the way. Have a wayward ghost in your house who needs a new home? Lulu's your girl!
On sale October 12, SC, 200pg, b&w, 6" x 9", $9.95

I'm enjoying the LULU books a lot, with dozens of imaginative short stories in every volume. And I love this compact size b&w format, very handy and affordable. It's good to see them coming out at a fairly steady pace 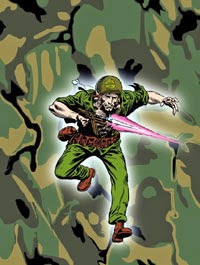 I love DC's war comics, and it's always good to see an affordable reprint of them. I kind of wish they hadn't picked PRIZE BATTLE, since that was just reprinted a few years ago, but this is some good stuff. Hope they pick some less common stuff for the other three stories. 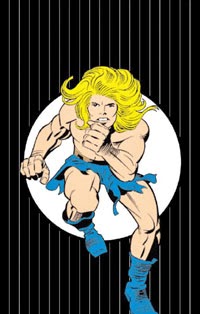 DC COMICS
KAMANDI ARCHIVES VOL. 1 HC
Written by Jack Kirby
Art by Kirby & Mike Royer
Cover by Kirby
The first archive in a series collecting the adventures of Kamandi, the last boy on Earth, by Jack Kirby! In these tales from KAMANDI #1-10 (1972-1973), Kamandi — one of the few survivors of the Great Disaster — must make his way in a world populated by bizarre mutated animals and other strange wonders!
On sale Sept 14 • 244 pg, FC, $49.99 US

Even the ancients with their imaginative movies, couldn't have produced anything like this! 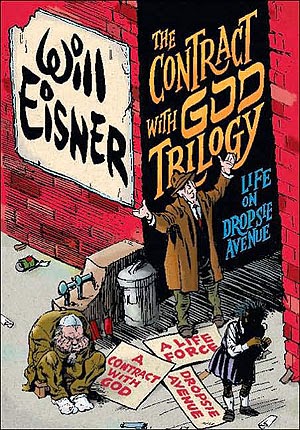 W.W. NORTON
WILL EISNER'S CONTRACT WITH GOD TRILOGY HC
by Will Eisner
A Contract with God, originally published in 1978, was the first graphic novel. Along with A Life Force and Dropsie Avenue, they laid the track for such seminal works as Maus and Persepolis. Set during the Great Depression, this literary trilogy, assembled in one volume for the first time, presents a treasure house of now near-mythic stories that fictionally illustrate the bittersweet tenement life of Eisner's youth. With nearly two dozen new illustrations and a revealing new foreword, this book ultimately tells the epic story of life, death, and resurrection while exploring man's fractious relationship with an all-too-vengeful God.
HC, 7x10, 544pgs, B&W MSRP: $35.00

Not sure if I'll pick these up, but they'll be interesting to see, and that's a great price for big hunk of Eisner. I might pick up the one with TO THE HEART OF THE STORM, depending on what books it's packaged with. 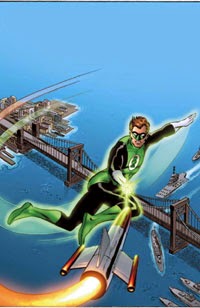 Should be another winner, that early Broome stuff is a lot of fun, and Kane's art will look great in this format. Glad I passed on the hardcovers of these, which I was sometimes tempted by. 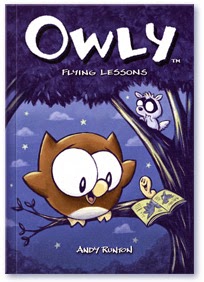 TOP SHELF PRODUCTIONS
OWLY VOLUME 3: FLYING LESSONS TP
by Andy Runton
The third graphic novel in the breakout, all-ages series is a charming story of understanding and acceptance, where Owly learns that everyone is special and it's okay to be different. Relying on a mixture of symbols, icons, and expressions to tell his silent stories, Andy Runton's clean, animated, and heartwarming style makes it a perfect read for anyone who's a fan of Jeff Smith's Bone or Mike Kunkel's Herobear and the Kid.
SC, 5x7, 112pgs, B&W SRP: $10.00

Saw the Free Comic Day version of this, and it was a pretty cute, if slight, read. I might take a look for this or the earlier books to read and eventually give away.

IMAGE COMICS
JACK STAFF #10
by PAUL GRIST
Karl Stringer was just a thief until he stole the Claw, a strange metal glove that bonded with his own hand and gave him the power of invisibility! He became the mysterious Super Villain known as The Claw – until the police caught up with him. Right now he's called Ben Kurmer, and he's part of Q, the enigmatic investigators of the Question Mark Crimes. Only when he gets caught up in a diamond robbery, he has to decide if he's really a hero or a villain! Complete story this issue!
September 21 • 32 pg • FC • $3.50

Paul Grist's work is always great, although JACK STAFF has been more hit-and-miss lately. A single issue story should be good, though. I'm getting tired of waiting for some new KANE, though.